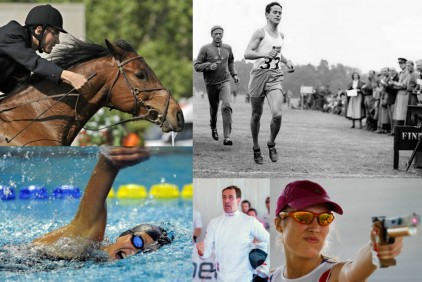 posted by Anne Bavelaar in Nieuws

When all the drama was happening a few months ago regarding which sport would be dropped from the Olympic program (it ended up being wrestling, which was then reinstated), the biggest argument against Modern Pentathlon was that it is an antiquated sport with no place in future Olympic programs.  Our sport was originally designed to simulate the experience of a 19th Century cavalry officer behind enemy lines–he must be able to defend himself in close combat using a sword (which is why Coubertin chose epee fencing, the most pure of the fencing disciplines, a fight to first blood where the entire body is a target), he must be able to swim in case he comes across a river or body of water in his escape, he must be able to ride a strange horse in case he finds one in the enemy’s camp, he must be able to defend himself with a pistol in case he gets the opportunity, and finally, he must be able to outrun his enemy.  Pierre de Coubertin, the founder of the Modern Olympic Games and the creator of our sport, thought these five disciplines defined the ideal all around athlete.

So, is the Modern Pentathlon an antiquated sport?  Soldiers today don’t fight with thrusting swords like epee’s.  The guns they use have nothing to do with the laser pistols we train and compete with today.  Most don’t learn to ride horses anymore, and, though they have tough fitness requirements, as far as I know, swimming isn’t one of them.  Perhaps Modern Pentathlon no longer describes the ideal soldier, but I would argue that, in terms of pop culture, it’s actually currently one of the most relevant sports in the Olympic movement.

Allow me to explain.  The idea of a zombie apocalypse has become really trendy over the past few years.  There are a number of examples in pop culture of television shows and movies that are centered around the idea of a zombie apocalypse, but for the sake of time and word count, I’m going to focus on The Walking Dead.  Now, if you’ve even watched just the first episode of the first season of the series, I don’t know how you could want anyone but a Modern Pentathlete on your team.  Many of the zombies are ‘put down’ by being either stabbed in the head or shot, zombies can’t swim, so if you get in trouble you can lure them into the water then swim away, they can’t keep up with horses (as we saw about halfway through the first episode when Rick was riding for much of the episode), and having a ‘rabbit’ who can outrun the zombies and lure them away from the rest of the group would likely prove invaluable.  Training as a Modern Pentathlete is the perfect preparation for a potential zombie apocalypse, and if you happen to be friends with a pentathlete… I guess you already have your Daryl.

Not into the zombie thing?  Ok.  The second movie in the Hunger Games series, Catching Fire, just came out a few weeks ago.  Still a bit of a stretch because, in real life, we don’t have people from the Capitol throwing us into a super technologically advanced arena to fight to the death.  But, if we were to be put in a situation like that, I think pentathletes would fare better than most.  We would be able to defend ourselves with swords/sword-like weapons, we could outrun most of the other tributes, we could easily navigate the water traps like the giant lake in Catching Fire, we could defend ourselves with a gun if we were to get one, and we’re well versed in dealing with animals we just met, in case the Game Makers decide to throw in an animal as a plot twist.  I think of any of the sports in the modern Olympic program, Modern Pentathlon would put forward the athletes with the best all-around preparatory training for success in the Hunger Games.

Still too much science fiction?  Ok.  The weight loss/obesity management market in North America is estimated to have been worth $104 billion in 2012, and is expected to balloon to $139.5 billion by 2017.  If you were to walk around a Modern Pentathlon World Cup event, many of the athletes you’d encounter could easily double as fitness models.  I don’t know very many men who wouldn’t want a body like David Svoboda’s or Valentin Prades’, and I think you’d be hard pressed to find a girl who wouldn’t pin a picture of Donata Rimsaite or Yane Marques as their fitness inspiration on Pinterest.  How about Laura Asadauskaite or Elena Rublevska or Evdokia Gretchichnikova’s post-baby bodies?  It’s nearly impossible to train in Modern Pentathlon without losing weight.  And common complaints many people have about weight loss programs (it gets boring, they reach their goals too soon, etc) are non-existent when you’re a pentathlete.  It’s impossible to get bored when you’re doing five different sports.  Even when you reach your goals in one of the disciplines, there will still be plenty of work to do in the other four.  Even when one sport is consistently difficult and slow to see gains in, there is always one that is going better than you expect it to, so you don’t get discouraged the same way as you do when you’re just trying to learn to run or swim or lift.

Maybe the history of the development of our sport is antiquated, but the history of the development of many of the sports in the summer Olympics is.  I think Modern Pentathlon fits easily into current pop culture, our governing body has taken the perfect steps to make the sport television/spectator/environmentally friendly, and the biggest strike against it is that no one outside the Olympic movement seems to know it exists.